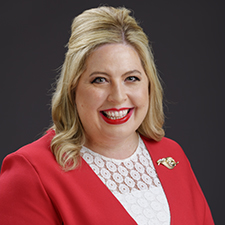 Growing up in a single parent family in the south western suburbs of Adelaide, Katrine understands the value of being part of a community that is connected and inclusive, one where everyone is supported and empowered.

Katrine is driven by a visceral sense of fairness and deeply believes in equality of opportunity and strives to amplify the voices of community members, especially those who most need to be heard.

Immediately prior to entering Parliament Katrine was Chief Executive Officer of Together SA and is a graduate of Flinders University, the Australian Institute of Company Directors and the Governor’s Leadership Foundation. Past jobs include clerical work and being a cleaner.

Since 2014, Katrine has been the Member for Reynell representing people in the southern community. Katrine is the Minister for Child Protection, Minister for Women and the Prevention of Domestic and Family Violence, and Minister for Recreation, Sport and Racing.

She previously served as Minister for Disabilities, Minister Assisting the Minister for Sport and Recreation, and Assistant Minister to the Premier in the Weatherill Labor Government. During this period, she worked with others to establish the South Australian Women in Sport Taskforce which she chaired.

Katrine lives in the south with her family where she is involved in many community groups and activities.  She loves spending time with family and friends and at the beach, including patrolling with Christies Beach Surf Lifesaving Club. Katrine is also an avid parkrunner/walker, sports fan, local footy commentator, amateur theatre enthusiast and live music fan.